Enter your email to receive a password reset link. 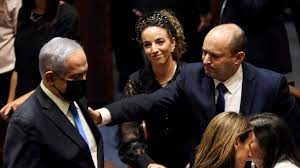 On sunday, Israel got its new Prime Minister, Naftali Bennnett. He was born in Haifa, the son of immigrants from the United States, Bennett served in the Sayeret Matkal and Maglan special forces units of the Israel Defense Forces, commanding many combat operations, and subsequently became a software entrepreneur. In 1999, he co-founded and co-owned the US company Cyota.

On 2 June 2021, Bennett agreed to a rotation government with Yair Lapid, where Bennett would serve as Israel's Prime Minister till 2023, after which Lapid would assume the role till 2025. Bennett was sworn in on 13 June 2021.

The new Israeli PM  Naftali , the 49 year old  leader of the right-wing Yamina party,  is a nationalist . Lapid is a centrist opposition leader. Israeli parliament , the Knesset voted 60-59 in favor of the new  government.

Benjamin Netanyahu was the longest serving Prime Minister of Israel . His  political career of 12 year rule ended as he faced corruption charges.

Israel’s newly elected Prime Minister Naftali Bennett said that he was looking forward to working with his Indian counterpart Narendra Modi to further develop the “unique and warm relations” between the two democracies.

Sorry! You can't submit a comment without logging in first. If you have a general question, please email us at admin@osmosiss.in